UMBRIA: A JEWEL IN THE HEART OF ITALY

UMBRIA: A JEWEL IN THE HEART OF ITALY 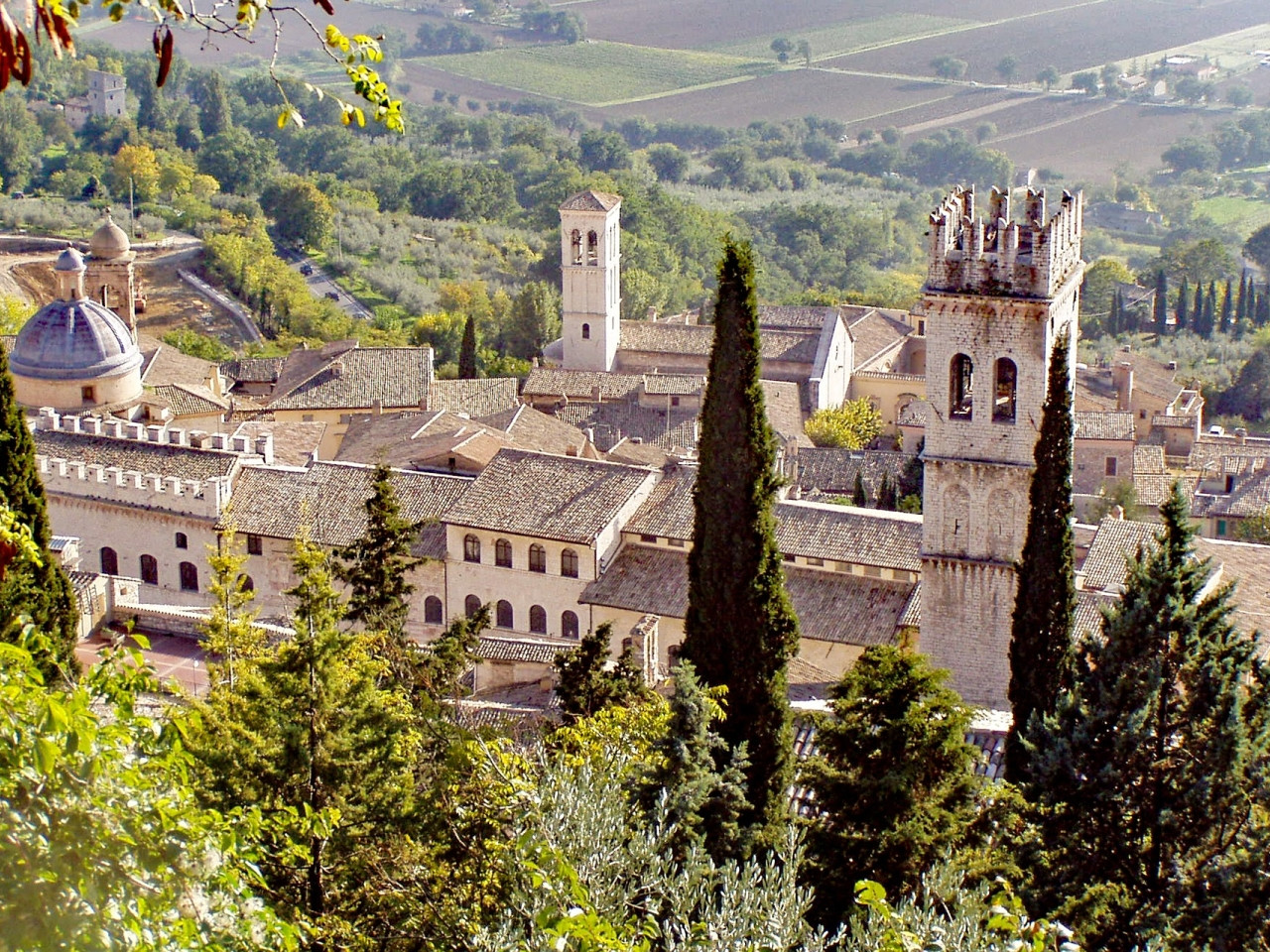 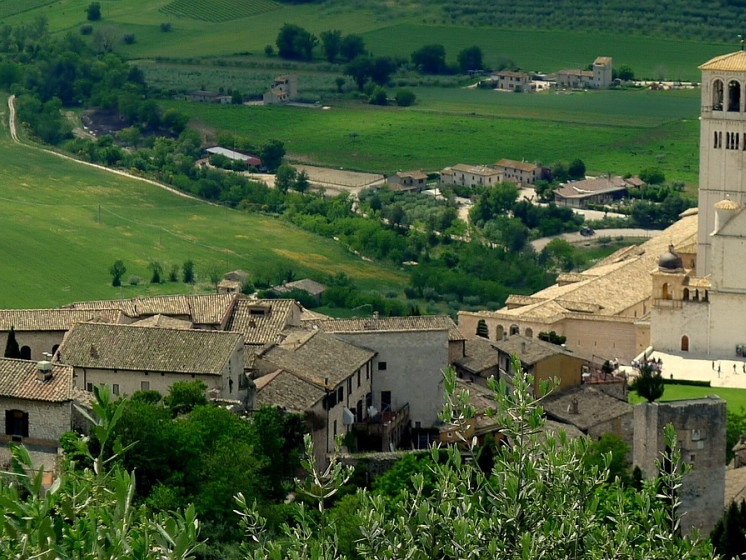 Arrival at Rome airport, welcome by our English speaking tour leader and coach transfer to the area of Assisi. Accommodation in a 3* sup. hotel such as Hotel Villa Elda, or similar. Welcome drink. Dinner and overnight stay.

Breakfast at the hotel, and departure by coach for a daily excursion with our tour leader. In the morning, guided visit of the medieval village of Gubbio. Stroll through the historical centre and discovery of the most important sites: the Piazza della Signoria, also known as “the hanging square", a terrace overlooking the beautiful Umbrian countryside, surrounded by towers and palaces in grey tones, including the Praetorian Palace; then the Church of San Francesco and the gothic Cathedral with a facade decorated with bas-reliefs. Guided tour of the Palazzo dei Consoli, an imposing Gothic building with a majestic façade, which houses an art galley with works by the school of Gubbio, and the collections of the town's Civic Museum, including the Iguvine tables: seven bronze tablets from the 3rd century B.C. written in the Umbrian language. Finally, the district of St. Martin, the place where you can better grasp the ancient soul of Gubbio through its alleys and typical corners. Free time for lunch (not included), then drive to Perugia, the capital city of Umbria. Guided walk in the city between Etruscan remains and medieval monuments. The prestigious Piazza IV Novembre is the beating heart of the city, and gathers its main monuments: the imposing Palazzo dei Priori with its majestic staircase, the Fontana Maggiore, a fountain covered with bas-reliefs by Nicola Pisano, and the Gothic Cathedral, whose facade presents a Baroque portal decorated with bronze statues of the Griffon and Leon, symbols of the city. Continue for a panoramic walk with a view of Rocca Paolina, a fortress commissioned by Pope Paul III Farnese, with an unexpected underground route and a very suggestive atmosphere. Finally, the Etruscan Arch: the most impressive of the city's five monumental gates, dating back to the 3rd century B.C. It is the best preserved Etruscan monumental gate in Italy. Back to the hotel, dinner and overnight stay.

After breakfast, departure by coach for a daily excursion with our tour leader. In the morning, road to Foligno. Meeting with the guide, and walk through the historical centre where all the main sites of the ancient village are located, including the Palazzo Comunale, in Neoclassical style, Palazzo del Podestà, and Palazzo Orfini, known above all for having been the place where the first edition of the Divine Comedy was printed in 1472. Continue to the Piazza della Repubblica dominated by the Cathedral of St. Feliciano, a Romanesque church with two sculpted facades, connected by an elevated passage to Palazzo Trinci. Visit of the interior of the Palace, which houses the Archaeological Museum and the Civic Pinacotheca, very appreciated for its beautiful Late Gothic frescoes by Gentile da Fabriano. Free time for lunch (not included). In the afternoon, departure for Spoleto, located on the old Flaminia road. Guided tour of this austere city, once a roman town and then the seat of a Lombard duchy. The walk through the elegant historic centre with its medieval lanes surrounded by beautiful fountains, offers an astonishing view of the Romanesque churches, including the great Romanesque cathedral with its Renaissance portico. Among the roman sites you will admire the Roman Arch of Druso and the Roman Theatre of the 1st century. In the late afternoon, back to the hotel. Dinner and overnight stay.

Breakfast at the hotel, then departure by coach for a daily excursion with our tour leader. In the morning, drive to Assisi. Meeting with the guide and visit of this medieval city and of the majestic Basilica dedicated to St. Francis, an architectural masterpiece that contains the most beautiful testimonies of Italian art of the Middle Ages. The Basilica, built on the tomb of the saint of Assisi, consists of a small church, decorated with frescoes by Simone Martini, and an elegant and slender upper basilica, decorated with an admirable cycle of Old Testament and Gospel paintings together with the 28 scenes from the life of St. Francis of Giotto, expressing the high point of medieval theology at the time of the full development of the Franciscan order. The excursion continues through the small streets of the village, where other religious buildings, such as the Church of Santa Chiara and the Cathedral of San Rufino stand; then the Place del Comune, the secular heart with its medieval public palaces, and finally the Tower of the People and the roman Temple of Minerve. Free time for lunch (not included). Road to the pretty village of Todi perched on a hill overlooking the Tiber valley. In the afternoon, visit of the village, where Etruscan, Roman and medieval footprints mingle. Discovery of the great Piazza del Popolo, dominated by the Cathedral of the 12th century with its monumental staircase, and the three Palaces, symbols of the power of the city: the Palace of the Priors, the Palace of the Captain and the Palace of the People (all external views). Walk along the narrow streets with beautiful flowered corners, and view of the Gothic Church of San Fortunato, where the Franciscan poet Jacopone da Todi is buried, and the majestic Temple of Consolation, the most significant monument of Renaissance architecture in Umbria. On the way back, stop in Torgiano for the tasting of the famous Umbrian wines. Back to the hotel, dinner and overnight stay.

Breakfast at the hotel, then transfer by coach to Rome airport with our tour escort. Check-in assistance and end of our services.

• 4 nights accommodation on H/B basis in mentioned 3* sup. hotels or similar, in double room
• All dinners excluding beverages
• Welcome drink on the day of arrival
• Wine tasting (day 4)
• The service of a professional English-speaking tour leader for the transfer from/to the airport
• Local guide services as mentioned in the program
• Transportation by air-conditioned G.T. bus according to the itinerary, including all city access fees as currently in force, and including meals and/or accommodation expenses necessary for the driver
• VAT as currently in force 10% for hotels, 5% for maritime transport, 22% other services
• Our constant phone support

The price doesn't include:

• Air transport
• Tourist tax
• Luncheons
• Drinks at meals
• Entrance fees
• Headsets (not mandatory)
• Luggage transport service at the hotels
• All services not mentioned in our program and in "the price includes"
• The possible increase in VAT, access and parking costs for the bus, taxes in general
• Extras, optional visits, tips and personal expenses

If you need more information, please feel free to contact us anytime, we will be happy to help you!